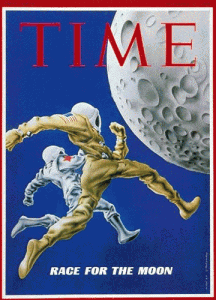 Why the New Space Race Starts in the Classroom

By Shannon Sweetser On October 14, 2010 · 3 Comments · In Assessments, Education: General

It”s amazing to me that the same country capable of placing a man on the moon 50 years ago is now struggling to produce students that are even at an average level of math and science.  This is the education crisis as I see it. Sixty years ago, President Kennedy called for Americans to put a man on the moon by the end of the decade. Meanwhile, President Obama calls on us to open our minds on ways to produce higher performing students by the end of the decade. Sounds simple enough in comparison, but can we do it?

According to the results of PISA, an internationally standardized assessment administered to 15-year-olds in schools across the world, the USA (ranked at the top of the scales 50 years ago) has fallen flat in literacy, math, and science when compared with the rest of the world. In fact, according to the PISA assessment results, the USA’s rank not only dropped; it is now dangerously close to the bottom. While countries such as Finland and South Korea soared to the top, the USA placed woefully in 21st in Science and 25th in Math out of 30 countries participating.

However, one area that the United States does continue to out-rank competing countries in (unfortunately) is spending per student. Yes, the US spends just over $129,000 from K through 12 while other countries with higher educational performance spend an average of $95,000 on their students.

The poor performance of US students vs. how much money is being spent is undoubtedly a problem for everyone in the education system, but it also struck a cord with the Obama administration as well. During a recent interview with the TODAY show, President Obama continued to make a strong case for why the education crisis can”t go unchecked any longer. He argued that if we truly want to boost student performance it will require a significant monetary investment to fund the hiring and training 10,000 new math and science teachers.

President Obama certainly touches on a topic that many education consultants believe could make all the difference in American schools. According to Amy Wilkins, an education expert who was recently interviewed for a CBS news article about the report, one common denominator between many of the top performing countries and the US is that they have a very strict and rigorous hiring policy for teachers; top countries like Finland and South Korea, for example, recruit teachers from the top 5-10% of graduating college seniors exclusively.

Though this stringent hiring process might seem worrisome to some US citizens who’ve experienced the sting of the job crisis this past year, the best take away from this piece of data is that the top countries select high caliber teachers year after year and thus are able to produce the best student performance year after year. Better teachers mean better graduating high school seniors who are ready for the challenges that college and the future will bring.

Is a Longer School Year the Answer?

According to the assessment, other factors like a longer school year and shorter vacation breaks seem a common theme within top performing countries.

Though reducing a child’s summer vacation may seem pitying to some, even President Obama admitted that the school year in advanced countries are an average 1-month longer; unfortunately, most American children are not benefiting from their extra rest.

In addition, teachers cite the long break between school years as a huge problem when students return to the classroom in fall. Ruth A. Peters, Ph. D, reported in 2006 that students loose approximately 2.6 months of grade level equivalency in mathematical computation skills over the summer. While students may have gained a tan when they return after their summer break, they’ve lost much of the knowledge they’ve acquired throughout the school year. That means that teachers spend more time re-teaching information that they’ve lost.

However hard this is for American teachers, tutors should reach out to parents and share the data from this study as a call to action to inspire more parents to extend their child’s education into the summer and sometimes even during school breaks.

6 Internet Trends to Watch In Education
A detailed review of the latest internet trends such as social media, video, game based-learning impacting education and how educators, teachers and tutors can embrace those changes with the rise of the digital- native.