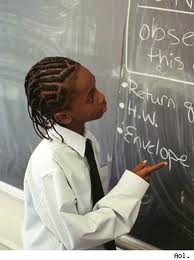 After the initial aftermath of Hurricane Katrina, it was difficult to predict how it would change the lives of students in New Orleans. After all, when your city is in shambles and many livelihoods rely on the rebuilding process, I’m sure it’s hard to imagine going back to school and returning to normal life ever again. According to a new study by Educate Now, a non profit organization dedicated to reforming New Orleans public schools, students affected by Katrina are adjusting better than expected after the storm and there was over a two-fold improvement in their basic and math and English scores.

The study claims that when you compare math and English on the 4th grade and 8th grade LEAP and the 10th grade GEE tests (in the 5 years prior to and after Hurricane Katrina), you’ll find that the percentage of students scoring Basic or above increased from a 7% improvement rate in 2000-2005 to a 16% improvement rate in 2005-2010.

Overall, that’s a 129% increase in improvement when compared to the rate in student performance before the hurricane and the state takeover.

New Orleans vs. the State of Louisiana: Which Students are Improving Faster?

The study also looked at how New Orleans was improving vs. the State of Louisiana. According to results from 4th, 8th and 10th grade LEAP and GEE tests in math and English, the city of New Orleans was more than 20% behind the state’s test average BEFORE Katrina. As you can see from the chart, though student performance improved overall after the storm, the state of Louisianna’s students performed better than those students in New Orleans.

However, New Orleans schools have improved faster than state schools.

This rapid improvement of New Orleans schools means that currently there is only a 13 point gap between the State and New Orleans.  This is an amazing feat considering that New Orleans schools were closed in 2005-2006 due to the immense reconstructive efforts needed within the city. Also, shortages of teachers and the loss of parents’ livelihoods are contributed difficulties that faced students in the school years that followed Katrina. It’s these difficulties which students have overcome which makes these numbers even more surprising and exciting to see.

These numbers are supported by more data coming out of Texas schools. Many school children displaced after Hurricane Katrina ended up in the Texas school system where they are demonstrating great improvement in their standardized test scores. According to a study by the Texas Department of Education, Katrina students are even out-performing some native Texas students who were unaffected by storm.

What inspirational stories of improving student achievement have you come across recently? Please share your stories in the comments. Thanks.