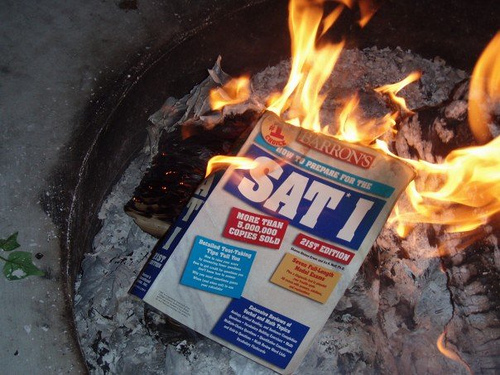 According to the New York Times, prestigious universities Georgetown, Harvard, and Princeton all have something in common. In the past year they’ve all dropped a test from their three-test admissions requirement. That means that, according to the National Association for College Admission Counsel, no American college currently requires more than 2 standardized tests to gain admission. For 18 other institutions, the ACT is as good as two SAT tests.

In the article, one Harvard professor was unsure about the new change in admission policy. Though the SAT writing test has only been around since 2005, some feel that it’s a good indication of how a student may perform in the future.

Other admissions counselors believe that requiring three tests would limit a university’s accessibility to students of a lower socioeconomic background. They believe that by requiring less testing requirements might assist students who are at a disadvantage financially. One law professor at Harvard, Lani Guiner, goes so far to call it a “wealth test.”

It’s true that the SAT has come a long way from the nights where high school students got a good night’s sleep. At many schools, test preparation for required state tests might as well be a subject in itself –alongside math, science and writing. Meanwhile, students coming from a more privileged background often will have additional access to tutoring sessions, test prep courses, and at-home support which may effectively improve their college test scores. Many public schools don”t offer any SAT-prep or support, so that leaves many equally capable young people unable to achieve the scores they wish, simply for lack of SAT test-taking skills, tricks, and preparation. Fortunately, many practice exams are available online. Socrato has an extensive SAT test library, for example.

Since a prestigious university such as Harvard still relies heavily on test scores to indicate a student’s aptitude for college, there’s not much they can do to create a better sense of “fairness” except limit the number of tests a student is required to take. Though, that doesn”t stop them from using language to control what online casino application materials they receive. For example, Georgetown may have dropped the 3-test requirement, but they still placed a caveat on the admissions requirements such as “three subject tests are strongly advised, but not required.”

Though it may seem rather manipulative for a university to include such a caveat on their admissions requirement (which to me appears to be a word of warning for any potential student who submits two and not three tests), the three-test requirement seems far from severe if your intended school is Harvard, Princeton and Georgetown.  Many of us even expect perverse and rigorous guidelines for acceptance from these colleges, which makes the lowered admission requirement all the more curious.

Without saying it outright, I feel that these universities are revealing a change in attitude toward standardized tests and the effect that they have on their student population. By loosening their testing requirements, schools now have the opportunity to vet students more acutely on other admissions criteria (perhaps even some overlooked criteria that allowed such a prestigious university to let in student Adam Wheeler, who recently plead guilty on the charge of faking his way into Harvard).