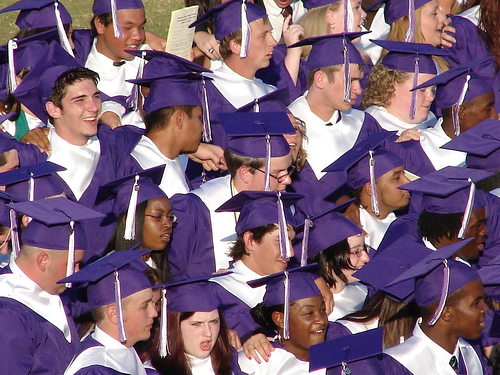 High school graduation or an equivalent diploma is a prerequisite to attending college. According to a new study from the Editorial Projects in Education Research Center at Education Week, high school graduation rates in the US are at their highest point since 1973. Almost 75% of US high school students earned their diploma in 2010 (the most recent available data). That’s 8% more than in 2000.

The new report also ranks the nation’s 50 largest school districts by highest and lowest graduation rates for 2010. Fairfax County, VA led with 85% while Detroit, with its largely low-income population, finished at the bottom with 46%. Also near the bottom was New York City at 54%.

Most school systems showed gains; in fact, thirteen states now have graduation rates over 80%, and only six are below 65%. Vermont led with 85% in 2010, while the District of Columbia trailed the pack at 57%. (I live in Maine, where despite considerable rural poverty, lack of funding and a host of other issues our high school graduation rate for 2011-2012 was over 85%. In my community, over 96% of students graduated.)

On the downside, more than 1 million students from this year’s nationwide high school ranks will drop out – that’s one student every 31 seconds. Compared with high-performing schools, low-performing school districts are likely to be urban, serve a minority-majority population, and have twice the rates of poverty.