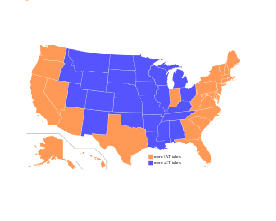 The popularity of newer developments in standardized testing such as the Common Core State Standards and PARCC assessments, however, have been less easy to predict in states.

The introduction of the Common Core educational standards in schools has had an effect on the content the ACT and SAT tests assess, in that both tests have made efforts to align their content with the Core. The PARCC assessments are more directly based on the Common Core, but have so far been adopted by many less states.

State membership in the Common Core and PARCC has undergone changes in the first few years of their full implementation, which has included state adoption and removal of membership, as well as various states of modified or discontinued use. The current status of membership in the Common Core and PARCC in states across the country continues to remain difficult to predict, and many states are currently in the process of modifying their status or seeking to do so.

The map diagrams below represent some of the changes in membership the Common Core and PARCC have undergone since their original status to the end of 2015, as well as the influence of the SAT and ACT in each state for comparison.

gray: no longer in use

gray, green states: no longer in use, undergoing changes

One Response to "Test Trends by State: PARCC, Common Core, SAT, and ACT"