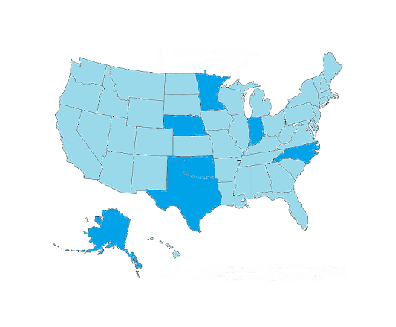 By Abhi On May 19, 2015 · Add Comment · In Common Core, Education: General, Education: Industry, In The News, Teaching, Testing

The Common Core State Standards official website states that currently, “Forty-three states, the District of Columbia, four territories, and the Department of Defense Education Activity (DoDEA) have voluntarily adopted and are moving forward with the Common Core.” This remarkable success can lead to the impression that the Common Core is on its way to becoming universal in the US.

The reality of the issue is a bit more complicated, and it is one that has been a topic of debate in education and politics for years. Among the states listed as not currently using the standards, 4 have not adopted (Texas, Nebraska, Virginia, and Alaska), 1 have partially adopted (Minnesota), and 2 have withdrawn adoption (Oklahoma, Indiana, and South Carolina). This changes any impressions we might have had about states having “not yet” adopted the Common Core, by showing that some states have directly resisted them.

How did this situation begin?

Although launched in 2009, the history of the Common Core dates back to the early 1990s, when states began to take an increased interest in state education standards. As the name suggests, standards serve as a guideline for what content should be taught in schools and what students should be expected to learn upon completing each grade. By 2000, education standards were being used in every state. However, these included different standards, ones that could not easily be compared or unified.

The Common Core was developed with the goal of standardizing these states standards, as well as increasing college and career readiness. It consists of standards for mathematics and English language arts/literacy (ELA), and has divisions for both high school and elementary school. Corestandards.org describes the developmental process of 2009 as “state-led,” driven by state school chiefs, governors, teachers, and associated organizations.

Since this time, the Common core has spread in popularity across the US, but also remains far from universal. Understanding these state differences is a complex topic, and one that has been depicted in different ways depending on the source.

A common support position has been that standardization is a positive step forward for improving education, and one that will be most effective if implemented universally. On the other side, some objectors have asked if adopting the Common Core is unnecessary or difficult to implement, as well as pointed out that states are already using their own existing education standard.

For its part, the corestandards.org website has taken the strategy of trying to clarify facts about the Common Core amid the debates in education and politics. It does this by covering topics such as “Myths versus Facts,” referring to “common misconceptions about the development, intent, content, and implementation of the standards.”

Despite the present circumstances of the Common Core, many assume it will eventually become universal in the US. Others are not so sure.

What do you think?