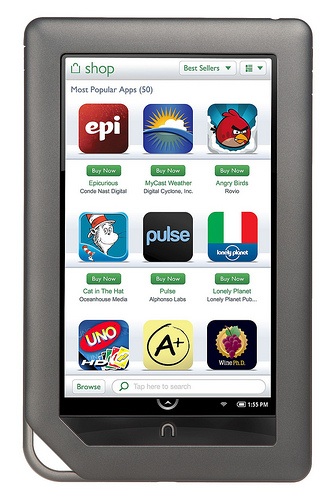 By Scott Cronenweth On May 1, 2012 · Add Comment · In Education: Technology, In The News

In a deal that renders moot a patent lawsuit between the parties, Microsoft announced on Monday that it would invest $300 million in Barnes & Noble’s Nook e-reader. The investment will spin off a new Barnes & Noble subsidiary called Newco, which will also encompass the company’s college e-textbook business. It is not yet known whether the new company will be publically traded.

Microsoft will have a 17.6% share in this new business, which is valued overall at $1.7 billion. Barnes & Noble, still the largest bookseller in the US, currently has over 25% share in the US market for e-readers and e-books.

One of the biggest changes this deal will bring is the integration of the Nook reading and bookstore application into the as-yet-unreleased Windows 8 operating system – including the versions for mobile devices like smartphones and tablets.

It has been publicly stated that the education focus of the deal centers on bringing e-textbooks to college students. However, it is virtually certain that Newco will also target K-12 students, especially given the successes of the iPad and Kindle in this market.

A few e-textbooks, in particular 300+ education e-books from ACSD, are already available on the Nook. Likewise, tablets that run Windows are slowly making inroads into the public schools. These devices don’t have the advantage of a large app store like the iPad. But Windows will soon have its own digital marketplace, which will include all Barnes & Noble’s electronic library.

What’s likely to happen, like incorporating cameras into phones, is that e-book readers will simply be incorporated into our PCs, laptops and mobile devices. So ultimately it’s not about selling a Kindle or a Nook, but about selling electronic content for learners and readers.

In this regard Microsoft and Barnes & Noble can create a tightly integrated product between the bookstore and the operating system, similar to what Apple currently offers. This competition could be good for consumers in general, as well as for teachers and tutors who are proponents of e-learning.

With so many learners of all ages now toting iPads and other tablet devices, the pace of electronic textbook publishing and adoption is likely to continue to accelerate. (Recent figures put the growth of e-books at almost 40% between 2008 and 2011.) The pace of growth will no doubt soar in the near future as e-reader technology becomes widely available in laptops and mobile devices.

Do you see the increased use of e-books in classrooms and elsewhere as a positive step for education? Please comment and share your opinions and observations.