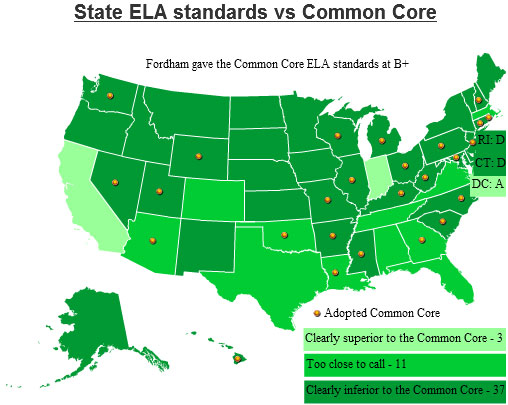 How the Common Core Stacks Up Against State Standards

Today the Massachusetts Board of Elementary and Secondary Education agreed to adopt the Common Core Standards for state standardized testing. In a 9-0 vote, Massachusetts became the 28th state in the U.S. to approve the new national standard and another 12 should follow suite by the Fall. In a couple of years the MCAS exam will be history.

So how exactly do the MCAS and all the other state exams stack up against the Common Core? There”s been a lot of debate here in Boston area and I found this great resource published by the Thomas B. Fordham Institute where they compared the state standards in all 50 states and the District of Columbia to the Common Core. Let the data put the debate to rest.

In Math, 39 states clearly had a standard that was inferior to the Common Core, and twelve states had equivalent standards with MA being one of those twelve. What do you think? Do you think a move to a common standard is a beneficial move to schools? How about for students?

6 Internet Trends to Watch In Education
A detailed review of the latest internet trends such as social media, video, game based-learning impacting education and how educators, teachers and tutors can embrace those changes with the rise of the digital- native.