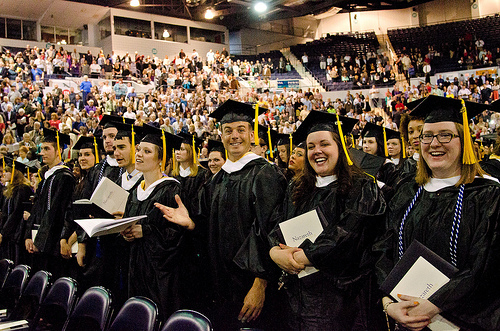 Yesterday the and Chicago Tribune posted articles on a new post-college standardized test called the Collegiate Learning Assessment. What is this test and why is it likely to be popular with graduating college seniors? Haven’t they endured enough standardized testing already?

Dubbed “an authentic assessment of 21st century skills,” the Collegiate Learning Assessment Plus (CLA ) is designed to give prospective employers a measure of students’ abilities and “employability” independent of grades and academic achievement. It could potentially serve a role similar to that of graduate school admission exams (e.g., the GRE), while also giving students the opportunity to put the results on their resumes—if they scored well…

Conversely, will the failure to provide a score soon be a detriment to getting a job? Are we creating another high-stakes testing hurdle that will prove more important to students’ futures than all their efforts in college? About 200 colleges, ranging from small liberal arts schools to huge state university systems (including California and Texas) have already signed up to give students the option to take the CLA tests at the end of the current academic year.

The test attempts to measure problem-solving and analytical skills, quantitative reasoning, reading and writing/communication skills, according to the non-profit Council for Aid to Education that developed it. Testing subject-area knowledge is not its goal. The test is scored on the 1,600-point scale once used by the SAT.

Why is this test gaining traction at a time when many universities are attempting to reduce the importance of high-stakes standardized testing in the admissions process? Proponents say it could help address concerns about “grade inflation;” the idea that schools award ever-higher grades in an effort to attract and retain students.

Indeed, students’ grade point averages have been on the rise for decades, but employers ostensibly feel that their level of preparation for the job market has not kept pace. According to a 2010 survey conducted for the Association of American Colleges and Universities, only one in four employers surveyed think US colleges are doing a good job preparing students for the global economy.

“Employers want to see something they can rely on,” said Michael Poliakoff, vice president of policy at the nonprofit American Council of Trustees and Alumni (as quoted in the Chicago Tribune). At the same time, President Obama just proposed a plan to rate colleges on their value for the money in terms of quality of education—and tie that measure to disbursement of federal aid.

Many employers have a longstanding practice of giving their own job-applicant assessments, which have the added value of testing for the kinds of skills and abilities the jobs they’re offering actually require. Does the CLA effectively replace these tests, or just pass costs on to universities and students? (The test currently will cost $35, and in many cases colleges are paying for it.)

Is this test a valid way to understand whether college students are learning, and how valuable they’ll be to prospective employers? And might correlations around graduates’ performance on this test provide a way for college-bound high school students to evaluate which schools offer the best education for the money?

One potential advantage of the CLA is that anybody can take it, whether they’ve earned a four-year degree from an accredited institution or not. This gives students who have taken a series of low-cost MOOCs a way to illustrate the value of their educational process, absent a college degree.

Do you think more standardized testing is the way to evaluate college graduates and improve our higher educational system?

2 Responses to "A Post-College SAT/ACT?!"